skip to main | skip to sidebar

WE HAVE MOVED TO

For more details please contact
Jeanette and John Isaacs-Young: 5442 2118 or 0438 562 118 ttnambour@yahoo.com.au ; jeanette@lifestreamassociates.com.au
From March 2012 we hope to resume meetings at the CWA Hall, Short Street, Nambour on the 4th Wednesday of every month from 7.00 pm. The CWA hall is next to the Nambour Town Square and adjoining the IGA supermarket complex.

All are welcome to join us at Transition events!

TRANSITION NAMBOUR HAS A NEW BLOG. THIS ONE IS NOW INACTIVE IN TERMS OF NEW MATERIAL AND WILL DISAPPEAR AFTER SOME TIME. PLEASE FIND US AT THE LINK BELOW.

Posted by Transition Nambour at 10:50 AM No comments:

Elizabeth Fekonia will be at the Transition stall at the Big Pineapple Saturday morning 7th March  from10am. She will be demonstrating how to create saurkraut and answering all your questions on home food production.
Posted by Transition Nambour at 6:10 AM No comments:

Hello fellow Transition Towners and folk who have recently registered interest through Nicole Foss or the Big Pineapple!
Transition Nambour had monthly meetings over the last couple of years. Since taking on the Big Pineapple Markets TT stall during our summer recess a few things have changed in people’s lives, and we are instead hosting a number of community events.
The next one for this year will be in April: a pot luck dinner followed by an open space ‘conversation’ to discuss where we might focus our energies and attention during the rest of the year.
We welcome folk from beyond (greater Nambour) who are just interested or are getting ready to launch other local Transition groups. It could be a rich and vibrant evening!
Venue to be confirmed and it will be Tuesday April 17th, in Nambour. 5.30 for dinner (pot luck) – 8.30 .
We recently had a stall at the Montville Sustainability Fair, and this resulted in an invitation to offer a positive Transition perspective at the Coal Seam Gas rally at Mapleton last Sunday.
At a meeting this week themed ‘Small is Beautiful’ and hosted by Nambour Community Centre the Open Space process came up with 3 topics: transport, ‘having no friends’, and transition equipment (stuff that does not require fossil fuels or power)
We’d like to remind people about preferential voting if you are voting in the State Election. You don’t have to ‘just vote one’. On the contrary, it is our democratic right to put preferences, and in the case of closely contested seats, or where there are Independent candidates it can make a huge difference.
http://www.ecq.qld.gov.au/voting.aspx?id=91#Counting
Posted by Transition Nambour at 8:24 AM No comments: 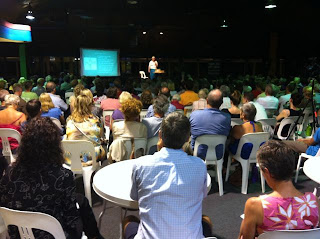 On Thursday 9th February Nicole Foss spoke to several hundred people at The Big Pineapple, Woombye. This was the largest turnout for a Transition Nambour event, the largest Nicole had spoken to anywhere in the world, and the first public event at the venue since its re-opening under new ownership.

The strength of the turnout may be attributed to the strong viral networking amongst the Sunshine Coast and Brisbane sustainability and environmental groups, and to the broader spectrum radio interviews that Transition Nambour was able to set up with Radio National “Life Matters” and Annie Gaffney (ABC Coast FM). Congratulations to the organising team. Annie’s support before, during and after the event was much appreciated.

Once the news of Nicole’s talk was out on the radio it was the strength of her message that attracted at least half of the new attendees and strengthened the resolve of the “already converted”. Her message is one that, like or not, one has to listen to in order to help make major decisions about the future.

In addition to this talk Nicole had time to spend a few hours talking with senior Sunshine Coast Council officers and to business people and academics at the Innovation Centre at the University of the Sunshine Coast. The main event was well supported by Council staff and councilors Jenny MacKay and Keryn Jones (Environment) attended.

Nicole spoke for and hour and a half after which there was a break for refreshments. She then continued to field a wide range of questions for a further hour, in spite of having had no sleep for over 24 hours.

Nicole’s academic experience draws together avenues of thought from a wide variety of disciplines, allowing her to see clearly the macro-economic position the world finds itself in today, and at the same time understanding the underlying human emotions that drive economies.

Nicole laid out her argument in a carefully orchestrated and illustrated PowerPoint display explaining a complex subject with enviable clarity and precision of language. Her relentless logic seemed to hit home.

She described the world economy as a giant “ponzi” scheme built on 30 years of expanding credit since the liberalisation of the major world economies in the 1980’s. This credit expansion was fueled on the way up by cheap oil energy and it has created very high levels of debt for citizens, businesses and governments.

Her argument runs that such wealth creation is largely a chimera as it is based entirely on the availability of cheap credit and property value is unrelated to its ability to generate income, or to its real underlying value. Property is at the heart of our economic peril because this property is the collateral used to expand the world wide credit system, and when the credit market dries up  (as in 2008) there exist far too many claims on the underlying (and now devaluing) collateral resulting in a credit implosion, asset price deflation and the grinding to a halt of the world economy.

Nicole sees the coming depression as being deeper and longer than that of the 1930’s because we no longer have a cheap source of fuel to help us climb our way out of the hole. The cost of extracting even the vast reserves left in the world are so high that the nett energy out represents little more than 40% of the reserves. That is, it costs 60% of the energy recovered just to extract itself.

All bubbles burst eventually she explained and they usually fall harder and faster than they climbed up, as they are driven by fear. She also claimed that they normally undershoot the point from which they started. This, she predicts, might see a return to asset values similar to those last seen in the 1970’s.

Nicole regards the major economies’ attempts to “band aid” their way out of trouble through Quantitative Easing, public purchase of private banks in crisis and by offering more debt to troubled countries like Greece as dealing only with the symptoms of the disease, and not with the deep underlying problems.

Australia’s unique problems include a strong reliance on international credit for property loans (at risk of a collapsing European credit market), rising oil imports, climate change, a dependency on fossil fuel derived nitrates for farming (and real soil depletion), and a vulnerability to the decline in commodity prices (now coming off their high) as the Chinese economic bubble starts to deflate.

Nicole was able to explain what happens in a deflationary economy both internationally and at home. She explained carefully why we would have deflation not inflation as in Weimar Germany  (a credit contraction not a money supply contraction) and she explained how people react in such circumstances, exacerbating the problem in an understandably human way.

Her advice was to rent property or own it without debt if you can. Renting is just a clever way of letting someone else experience a devaluing asset!

Pay off all debt because debt just creates a type of indenture to others, and debts will be chased for recovery. In the short term cash is king but in the medium term, banks are likely to fail and short-term government bonds are probably best, but nothing is guaranteed. Beyond that, if you have cash available and recoverable, you may be able to buy some hard assets very cheaply. Gold is both over allocated and of little use in practice, and will crash in value as no one will have any cash to buy it with.

Finally she delivered a more up beat assessment of how we can mitigate the worst of these effects. Nicole spoke at some length about how to deal with living through such a crisis in the world economy and emphasised the unique role of local community sharing and networking. She sees a key element to be that of de-centralising utilities and services (local power supply, local food supply, local government decisions/accountability, barter currencies, etc), and not to be expecting big government top- down solutions.

Building a new economy through grassroots movements like the Transition Network and building local resilience through permaculture groups will be important.

Life after such a power-down would be slower and there would be less consumer choice but it could be better, and planning for such an event – given the constraints that will also arise through expensive fuel and ongoing climate change – is vitally important.

By experiencing such a change we will learn to value the true wealth within our lives –wealth that cannot simply be measured by a unit of currency  - the Earth, our soil (where true wealth resides), relationships, family, community, the arts and our true culture.

There will be a Transition Nambour  follow up meeting to discuss Nicole's talk soon. She writes as “Stoneleigh” on www.theautomaticearth.org

James Macdonald-Buchanan
Posted by Transition Nambour at 9:39 AM No comments:

The Nicole Foss visit to the Sunshine Coast

The night was very well attended by a receptive and appreciative audience. Following her talk there was an interesting Question and Answers session.

Nicole’s message has struck a chord with many people and her visit has been a catalyst for a number of positive initiatives in the area. 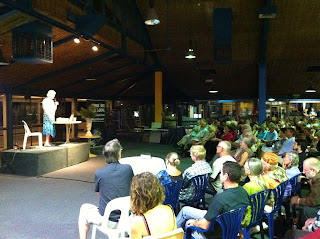 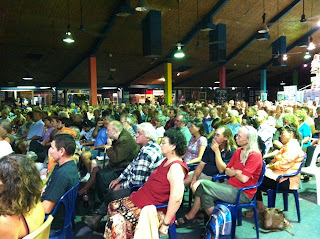 Talk by Nicole Foos at the Big Pineapple on Thursday 9th February at 6.00 pm

Why is your local community the answer
to global economic implosion? 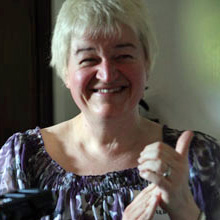 Nicole Foss is one of those all too rare big picture people who
both understands and can explain the links between the many converging factors now threatening to re-design
life as we have known it.

Tickets: $10.00/$8.00 concession - Available at the door
or from the Transition Town Nambour stall  at the Big Pineapple Growers’ Markets  every Saturday morning

Down to earth gardener, Dee Humphries from Kin Kin, will be our special guest at the Transition Town stall at the Big Pineapple Growers Market on Saturday 4th February.

Dee will share her knowledge of edible weeds and growing animals as food plus will give helpful hints on how to make 18-day compost.

Visit the Transition Town stall for useful information on sustainable living and upcoming community events. Browse the markets from 6.30 am to 12.00 noon each Saturday.
Posted by Transition Nambour at 11:44 PM No comments:

At our very first meeting on Wednesday March 24 it was decided that the best way to communicate was via the internet - so this blog has been created. If you'd like to keep in touch with what's happening please subscribe (above) and updates will be sent directly to your inbox, so you won't miss a thing. image of Nambour courtesy of the Sunshine Coast Daily 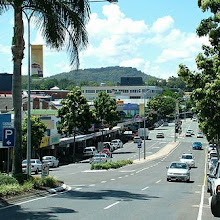 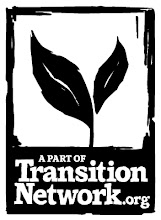